EAST NOEL: RCMP are investigating a break and enter into a vehicle that occurred on Dec. 22 in rural East Hants.

S/Sgt. Cory Bushell, spokesman with East Hants RCMP, said police received a call of a break-and-enter into truck trailers located at a business in East Noel.

“The culprit cut the lock to gain entrance and removed supplies,” he said.

The trucks were used as storage.

S/Sgt. Bushell said the matter is still under investigation. 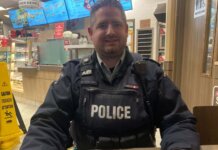