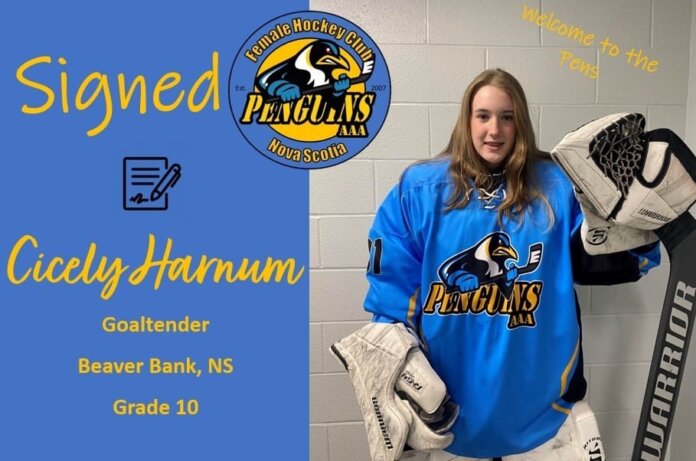 BEAVER BANK: A goalie from Beaver Bank has been signed to play at the U-18 female midget level.

The Action Benefits Lady Penguins U-18 AAA hockey team of the Maritime Major Female Hockey League announced the signing of Cicely Harnum in a recent post.

Harnum is a Grade 10 student who attends Lockview High School.

This past year she played with the LHS Lady Dragons as well as the Metro West (MW) Force Warriors.

With the Warriors, she played 405 minutes during the regular season, with a 2.11 Goals Against Average (GAA) as she surrendered 19 goals against. Harnum had one shutout.

In the playoffs with the Warriors, she gave up three goals in 135 minutes played with one shutout for a 1.00 GAA.

As a Lady Dragon, Harnum won five games, giving up six goals in 216 minutes of action for a 1.00 GAA. This included two shutouts.

For the post-season, Harnum went 2-1 in three games, surrendering four goals in 144 minutes of action for a 1.00 GAA. It included two shutouts.