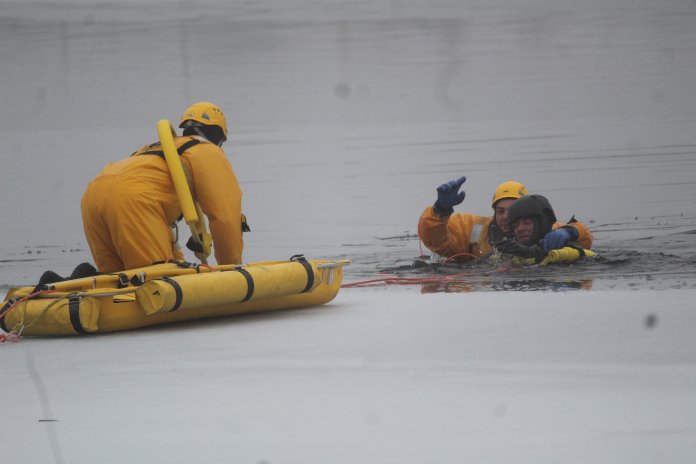 FALL RIVER: Firefighters from Station 45 in Fall River along with Halifax District RCMP and Canadian Red Cross officials showed the importance of a quick response in the event of a fall through many of the lakes and ponds in the surrounding areas.

On Lake Thomas behind Inn on the Lake, RCMP Const. Michael Elms donned the gear he needed to play victim of a fall through ice while career firefighters stood at the ready to practice the technique of an ice rescue.

Scott Shaffner with Halifax Regional Fire said its prudent people should be using caution all the time when checking the ice.

“You never know what the ice is going to be like, especially here in N.S.,” said Shaffner. “We get a lot of cold weather, a lot of warm weather so it’s never consistent.”

He said HRM has a system in place where they do check the ice at various locations across the municipality.

“It was 18 inches thick there and here in Fall River the lake is open with water visible,” he said.

Shaffner said caution is number one priority all the time for people out and about on the lakes and rivers in the winter.

“We don’t like to respond to ice rescues,” he said. “We encourage people to use a lot of caution on the ice.”

An official from the Canadian Red Cross did a demonstration where they checked the thickness of the ice for those in attendance.

Being able to self extricate from a fall through the ice makes a difference, however shock and fatigue, or a medical condition, can pose a serious risk. Fast reactions by trained responders plays a vital role in fast rescue.

Ice thickness should be:

Many factors affect ice thickness including:

Make sure you know how to escape if you break through ice, and how to help someone escape a similar situation. If you break though:

If someone else breaks through:

The Laker - May 25, 2020
A release from Halifax Water FALL RIVER: The COVID-19 pandemic has many Halifax Water customers concerned about the future...

Aquatic Centre opening remains on hold due to COVID19